Don of Japanese City Pop:What does Tasturo Yamashita speaks between the songs in the live show?

If you are a big fan of the “Japanese City Pop” in 80’s, you must want to go and enjoy the concert of Tasturou Yamashita.

You guys who are not living in Japan, it’s more than difficult. Actually it’s quite diffficlut to Japanese fans too.

He insists to play in the hall where you can listen to his music in its best quality. Which means he’d never play in the huge domes or stadiums where more than like ten thousands of audiences can join. Naturally, his consert tour can never include all the fans who want to go to his live concert.

So, you have to draw the winning ticket if you want to enter the small and cozy hall(s).

I myself have won the ticket of the last year concert “PERFORMANCE 2018“.

And luckily enough I won the ticket for this year’s concert “PERFORMANCE 2019” which was held in Nakano Sun Plaza Hall in  9th August 2019.

Yes, there are many Japanese fans who write about the set list and all.

But as far as I know there’s no one who writes about what he talks between the songs in English or no other languages. And it’s one of the things you can’t kwow unless you actually go to his concert. So you can think this post of mine as a contribution or responsibility of the one who is lucly enough to enjoy his great live stage. I know there msut be many funny mistakes in regard with grammer and colloaction and all. But the thing is that I can share a valuable content which no one does. Peace!

First, the Nakano Sun Plaza Hall exterior, if you are interested. 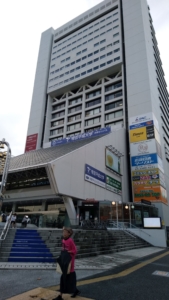 Once you’re inside the hall, there is a check booth where staff chek you tickets and ID card. Last time, there was no strict check booth.

In the lobby of the hall you can see the posters and flowers. 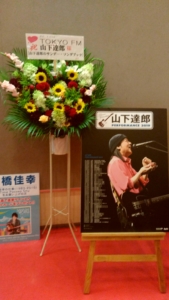 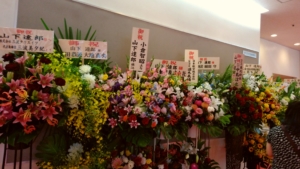 you can buy some goods before the live starts. I bought a T-shirt last time and again bougth this year’s T-Shirt. 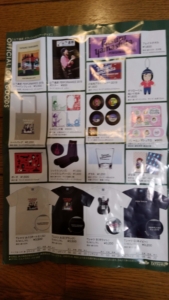 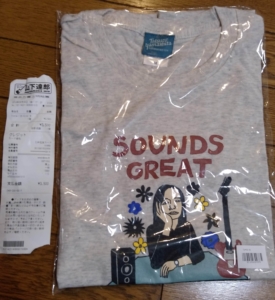 Actualluy, I didn’t check the place of the sheet when I exchange the ticket at convenience store. But it was a very good place; the 6th raw of the fisrt floor which means you can see his play so close! Lucky me!

This is the one I shot right befor the show begins. You can tell how close my sheet is. 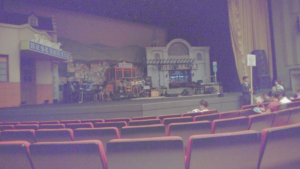 As you can check the set list anywhere, so I am going to report what he speaks to the audience in between his performance.

He’s been doing DJ in his daio program for so long years from 1992. So hi is known as a very talkative person. He doesn’t stop once he speaks.

Naturally, his speeches between the songs are quite massive and intriguing. I’d try my best to recall my memory of what he talked to us in the show.

As always, the show bigins with “Sparkle” along with his renowned clean and sharp telacaster strokes.

After several songs he starts to to speaks.

“Today, my show started 10 minutes later, so first I analogize. There is quite a many traffic jams everywhere because it’s the summer vacation season. Some of the audiences could’t come to the entry booth on time, so I decided to wait for 10 minutes and its quite rare and I recall it must be only the second time that I couldn’t start on time(sharp).”

I’m over fifty years old so I’ve actually experienced quite a many live shows including theater and ballet and installation and all. But most of those I might say all of the shows would’t start just as it’s written on the tickets.

I’ve seen the live show of João Gilberto in 2006 Tokyo, and it began more than an hour later.

The third song was “Donut Song” using the “second line” of “IKO IKO” by Doctor John.

He talks about what he feels about the situation where we are in now.

“Nowadays, tight and critical atmosphere is flowing not only in  Japan but all over the the world, and it is difficult to say that the  is facing the very we are living in the peaceful and calm world. So at least I want make this couple of hours very warm and positive and happy. So I’d like to play the bright and strong songs as many as possible, and I hope those songs will make you remind the life is quite a beautiful and valuable thing which you can never spoil.”

First performance in the show

The seventh song was Southbound #9 and he said “This seems t be one of the songs that is difficult to maintain live re productivity, so to speak. This performance is the first time to sing in public.”

“The support member of the tour is the same from 2008, so it(s almost like a band so far. There are more repertoires that can be performed live Now there are about seventy songs that  can play anytime from the 300 songs I’ve written, but I’d like to increase the repertoire of several songs every year.

As was the case last year, he speaks about the his gurus musicians and friends who passed and rest in peace.

“The number of people who have crossed the mid-60s and my friends, acquaintances, relatives, etc. have gone to the heaven  and the numbers has been increasing as the year progresses. In particular, We’ve lost Eiich Ohtaki before seven years and it’s a long time.”

“It was the first time I sang in public as a member of the SUGARBABE and it was a chorus team at  dissolution concert of the band “Happy End” .

“If I hadn’t met him, my musician’s life would have been very different. As you know, Eiich Ohtaki has a very enthusiastic fans called” Niagarers”. But I honestly don’t like those people so much, so I’ve been thinking that I really don’t want to do anything according to their tastes.”

“And when he died, I was asked to make  some comments from many media, but for me, Mr. Ohtaki is so close that I think it’s a relationship where I can’t say anything.”

“Some of my friend reminded me of an anecdote regarding  Ohataki-san. He and I and some of my friends went to karaoke one day. And I unintentionally sang of his mega-hit song “Kimi wa tennenshoku (I can see you in the natural color(not the monotone)）”.

“After I finished the song,Ohtaki-san said, “You can take the song and it’s yours. I have forgotten it all the time, but thanks to that person the other day. So, I got older and came a little tolerant, I won’t say too cramped to his fans, and I will take the words as a kind of will or authority that I can sing the song and I have to sing the song from now so that the song remains and it’s like torch relay of the Olympics.”

And he started to sing the song full song.

Above is the original version of “Kimi wa tennen-shoku” and vary rare live footage which you can’t see so often. Sorry for some delays and all.

Ohtaki sings live on stage so mellow and beautifully.

After singing he said.

“The musicians who have passed away must have lost their physical entities, but the music will remain. In this way, I believe, singing those people’s songs would be a kind of service to their souls.” .

“After all, no question that I am the one who can sing Ohtaki-San’s songs the best in all over the world,” he proudly said and audience .

Of course, the hall applauded.

After the song, he started the song “Reborn”.

I believe he was singing for the artists who passed away including Ohtaki.

You will be brought back to life

You are waiting for me in some where in the eternity

Souls never perish Until we will meet again

It’s not a long good bye

Many thanks from me

A short good by from me

“The reason why I have been able to go on touring until this age for like eleven years without no trouble is that I am healthy. Nothing is more important than health. So please take a really good care of yourselves”

He said that he played here when he was in the Sugarbabe and “I did the most performance in Nakano Sun Plaza and it’s officially the track record and it seems not easy to break the record.”

“Well, Tokyo Dome can have forty thousands of audience and Nakano two thousands. If you do the Dome once, it means twenty times of Nakano. But the live show is working that way I believe. You have to to have the guideline for the sound quality, stage direction, lighting and so on, and which means you don’t have so many options. And that is the reason why you can’t come to the concert, can’t win the tickets and so on. I apologize all the inconveniences, but I’m glad if you kindly understand the musicianship that I believe ”

I myself have been to Tokyo Dome and Budokan and other stadiums, but honestly those facilities are not for the music performance. The sound is too loud and hurts my ears (I wear ear-plugs), and distorted and you can’t tell what chords you’re hearing and you can’t listen to the vocals. you can’t say it’s a music concert. Just a party space alright.

Tokyo Kokusai Forum is very good place for the concert. I went to listen to the Brian Will son’s live show and it was fabulous and everything was alright as a concert.

He did some over songs as always. This year, the repertoires includes Maria Takeuchi (his wife), Bob Dylan, standards.

And he said “I don’t know why but you get excited more, and it’s a funny situation going around ”

He sang “High teen Boggie  ” which was he wrote many ago for some idle singer.

after the show ended, we clapped our hands and after five minuets or so. The band come back to the stage again.

He strongly claimed to the audience.

“I will keep on doing the show as long as I can, without prompter and dancers and lip-sinc. It’s a real bare knuckle fight always”

Next year, he abandoned the “PERFORMANCE 2020” because of the Olympics and Pragmatics, the traffic jam and hotel facilities must be so jammed.

Lastly he sang “Your Eyes” as A-ape la version with backing track of his multi-chorus.

Maybe you want to listen to the song , Maria”s version sometimes.

Below is her news release album.

Very satiating performance have continued for three and half hours without no break other than the we wan to more  timing.

I hope you guys can find one or two topics you can enjoy.